What Are The Willow Awards? – Regina Teachers’ Convention Presentation March 2021

The three categories were established to encourage participation by all children, regardless of the level at which they are reading. They include:

Participation in the Willow Awards is free to Saskatchewan children and youth. They may vote for their favourite book in any category in which they have read the minimum number of books required. Individuals may vote. Teachers, librarians or teacher-librarians can submit tallies of votes made in their buildings.

In the first year of voting, 2002, more than 5,000 voters participated. In recent years, the number of votes collected has increased to more than 15,000.

Ballots and how to vote for the current Willow Awards may be found under the VOTE tab on the home page.

SYRCA publishes posters, bookmarks, and award stickers. We also manage a website to provide activities and information related to the nominated books, authors and illustrators.

The Willow Awards Gala is held annually where authors of the students’ favourite books are presented with their Willow Awards.

Each fall, schools and libraries are invited to submit the ideas and activities they have conducted around the Willows to be eligible for book prizes.

“Thanks for giving us the opportunity to participate! I get so much positive feedback from both the students and teachers!” 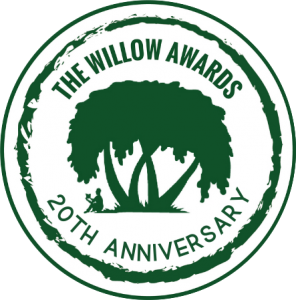 May 2000 – At a  Saskatchewan School Library Association (SSLA) board meeting following the AGM and conference, the secretary, Judy Nicholson, agreed to strike a committee that would review options for a Saskatchewan children’s choice award and make recommendations to the SSLA board.

October /November 2000 –  A committee of 4 was struck and met in the Thunder Creek School Division  board office in early October. In November, the SSLA board accepted the report and made a decision to contract Marion Perry to study the feasibility of creating an independent association and to determine what the process might be.

Winter 2001: A Grassroots Project as a Pilot – Judy Nicholson applied for a Grassroots grant to develop a website as a pilot for the Willow Awards.  Members of the committee, Stephanie Olsen, Lori Rog, Lyn Gilbert, and the website developer selected books for three age categories, Kindergarten to Grade 3, Grade 4 to 8 and Grade 10 to 12. Each list of books contained at least one Saskatchewan author. The website was used to share information and register votes.  By the conclusion of the pilot, there were about 30 teachers involved and votes collected from approximately 600 young readers across the categories.

August 31, 2001 – SYRCA was established as a non-profit organization.

September 15, 2001 – The Inaugural Board Meeting – The following people were the first members of the Willow Awards Board.

At this meeting, the purpose of the Willow Awards was formally established. It was determined that the mission of SYRCA would be to promote and celebrate Canadian literature. Each year, Saskatchewan children and youth would vote for Willow Award recipients from finalists nominated in three award categories (Shining Willow, Diamond Willow and Snow Willow).

The board decided to use SLA’s email policy of the day. As well, the board applied to receive charitable status.

March 2, 2002 – It was determined that there would be a media launch of the Willow Awards on Saturday, October 19th, 2002  in conjunction with Saskatchewan Library Week. The first awards ceremony would be held at  Dr. John G. Egnatoff School in Saskatoon on May 30, 2003.

April 27, 2002 – Attendees at the Saskatchewan Library Association (SLA) Conference appeared interested and excited about the Willow Awards. Both library board members and librarians took packages back to their respective libraries. Saskatoon children’s librarians had already had a meeting and discussed the awards and how they might become involved.

Liz Roberts sent a thank you to SSLA for its support in initiating this project and providing financial support for the first two years. SSLA was given special recognition at the first gala. .

September 28, 2002 – An article about the Willows was shared. It was written by President Marion Perry for the Forum.

The marketing committee planned media kits that included a bookmark, a copy of the Forum article, a one-page document that linked the Willow Awards launch to both Education Week and Saskatchewan Library Week, and other information.

Vice -President Claire Issac suggested to members of SLA that they could select The Willow Awards as the theme for the next summer reading program through the public library system.

October 19, 2002 – This marked the launch of the first Award Cycle at Grant Road School in Regina, coinciding with Saskatchewan Education Week and Saskatchewan Library Week.

May 23, 2003 – The first Awards Gala, attended by the Lieutenant Governor of Saskatchewan, was held at  Dr. John G. Egnatoff School in Saskatoon.

Since that first Awards Gala in 2003, the Willow Awards have continued much as they were originally planned. While there have been slight variations in the annual cycle of the awards and the policies and procedures have evolved, the Willow Awards continues to provide a venue to expose the young readers of Saskatchewan to quality Canadian literature.

Part 2 of the Willow Awards History will provide more details of the work during the ensuing 20 years.